Blog
After Effects
Everything you need to know about VFX 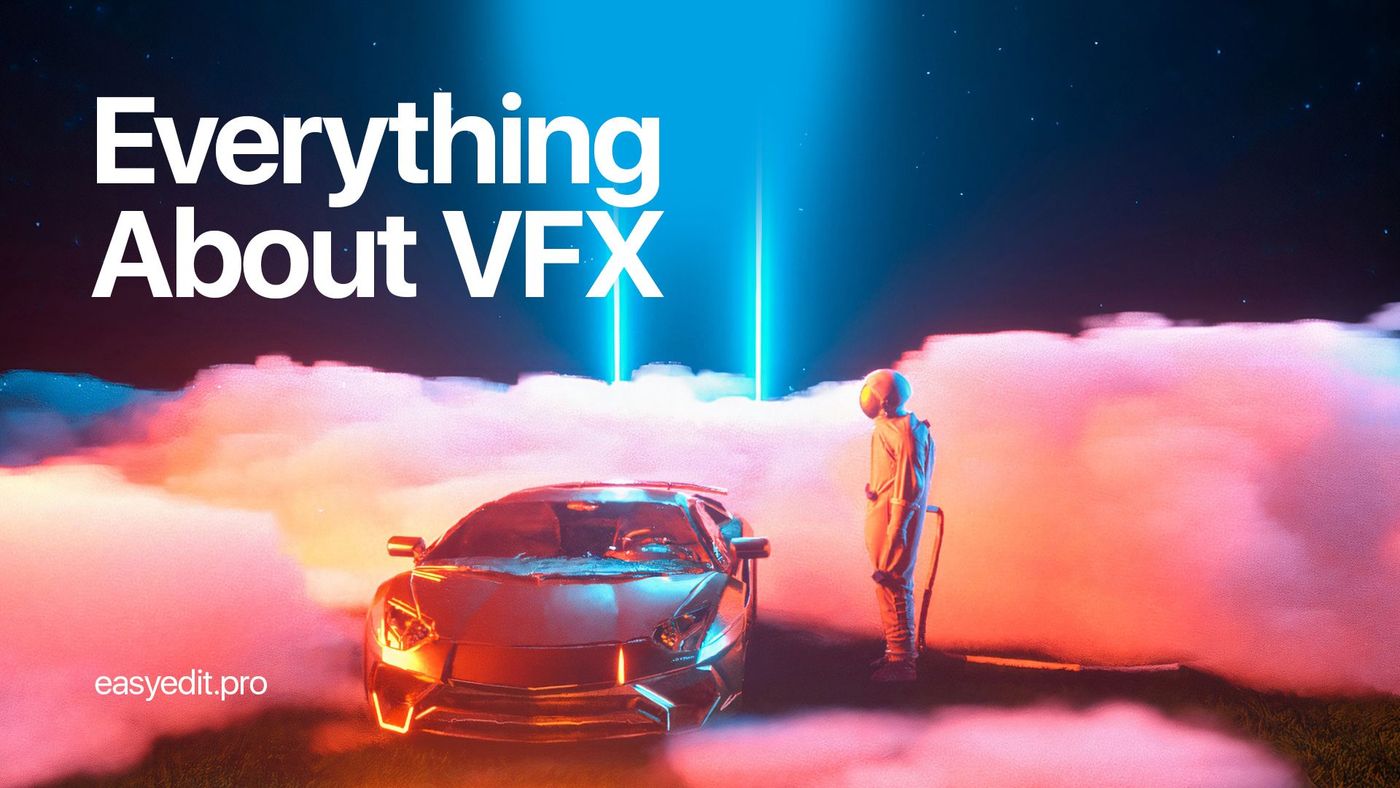 Nowadays, effects are used everywhere. VFX artists either work with a studio or freelance; make their art from cinematography, music videos and ads, to videogames and virtual/augmented reality projects.

Info
Effects play a great role in the production and help to create or enhance the imaginary story or virtual reality. In this guide, we'll learn what VFX are, what are types of them, where you can create them and how you can become a VFX artist in 2022. Let's start!

VFX means Visual Effects and helps in the creation of environments, objects, creatures, and even people that are not part of the on-screen imagery or even don't physically exist in real life. This type of effects allows filmmakers to manipulate the picture and create the desired final result in post-production. VFX often combines different visual effects and techniques, including CGI, Chroma Key (green screen) and other tools.

The difference between VFX and SFX

SFX means for Special Effects and mainly refers to the mechanical or optical effects, used to create the illusion of the environment.Unlike VFX, SFX is used in the process of filming, not in the post-production stage; examples include moving props, pyrotechnics, physical rain, snow or clouds, animatronics, destruction processes, etc.

While SFX are applied during the filming process, all VFX are added after filming in post-production. SFX came around much earlier (in 1930s) than VFX, but are still used in many projects, including television and ads.

Each visual effects studio has a team, specializing on a particular technique and specialty.Most types of VFX fall into one or more of the following categories:

CGI: Stands for computer-generated imagery and means digitally created effects added in post-production. CGI is the creation of any object, creature, effect or surface. This technique is widely used to create a model for an ad, or object that don't exist in real life; enhance the picture with additional elements and effects (like a big army in an epic movie, or a crashing plane);

Compositing: stands for combining different visual elements together in a complete picture. The artists use a green screen which is later replaced with graphics on post-production stage. This technique is also widely used in movies and ads. Can be also combined with the SFX technique called Matte Painting;

Motion capture: Is an action reference and used for creating a CG model from a real actor or object with help of a motion suit. Each movement of an actor is digitally recorded using motion markers and then transferred into a model. Apart from movements, this technique can be used to record facial expressions (for example, to create a realistic creature).

CG product models, objects or creatures; motion graphics of virtual objects or reality; effects in music videos and many other post-production things. This type of effects equally serves marketing needs and cinematography production.

For example, Puma marketing surveys say that target audience is 9% less likely to stop watching a video with visual effects in comparison to an ad without VFX.

There are also types of SFX:

Physical effects such as pyrotechnics, fake weather effects, sound support to actions (punches, hits and other), moving objects, physical explosions and other technical effects. With the help of this group of effects, you can also create different optical illusions, for example, make a tiny object look big with the help of miniatures created for the set.

What VFX artist does?

Visual effects are created by the whole team, where each artist does a very particular job, depending on his skills and tasks. Usually, VFX team has such artists:

Teams of artists differ greatly from company to company and from project to project, but these are usually the main roles in the effects production team. Depending on budget and requirements, you can meet specialists, like Pipeline TD, who overwatches the process, consistency, speed and quality of creation; Previsualists, who create a 3D animated version of the project or movie, and other.As you can see, the main idea is to do each part of the process professionally and in the team. If the project's budget is low, the same artist can do modeling and rigging, FX artists can create simulations and object textures, etc.

Depending on different tasks, you can use software to generate visual effects. Among your options to create CGI, effects or animation will be:

The range of good software, used by world's biggest studios, is great and depends on particular tasks - whether you need to create 3D models, textures, animations or effects. We've made a detailed list of the best motion graphics software you can choose from.

Pursuing a career of VFX artist means you are creative, handy with software and can tell a visual story. There are many different roads you can take in the VFX industry.As in many other creative paths, you can start from attending profile courses or getting a degree, which will lead you through all aspects of digital creation and will give you a strong hand of assistance from more experienced artists.

This area is highly competitive and in all cases requires a background in design and practicing experience on related projects. If you don't have such a background, explore the direction of VFX you want to go for and learn the suitable software and create your first portfolio projects.

Communicate with other artists and gain their feedback, find your first freelance jobs and gain experience. Step by step, you'll be able to work for big studios and with a solid portfolio, you'll create the world's biggest projects!

As we can see, visual effects are the key, and can not just play a complementary role in the production, but lead to the project's success and give the massive result. Whether it is promotional advertisements and television, computer games or virtual reality VFX artists will be needed in every area and the demand on them will only grow with years.Hope you found this guide useful and it will help you in your future career!

If you want to be an expert of video production, check the guide how to film like a pro.

After Effects 2023 - New Features and Updates

Adobe finally launched the biggest update for After Effects 2023 with new features: composition presets, native H.264 rendering without an encoder, new track mattes, keyframe labels and many other interesting features. Let's find out what we can do with it!

After Effects Tutorial. Animate title, animate logo, animate placeholder or any button with more than 2000 different animation presets. Apart from presets, you’ll find a grid system and will be able to create professional design from scratch.