Blog
Design
Principles all designers should know: The Vignelli Canon 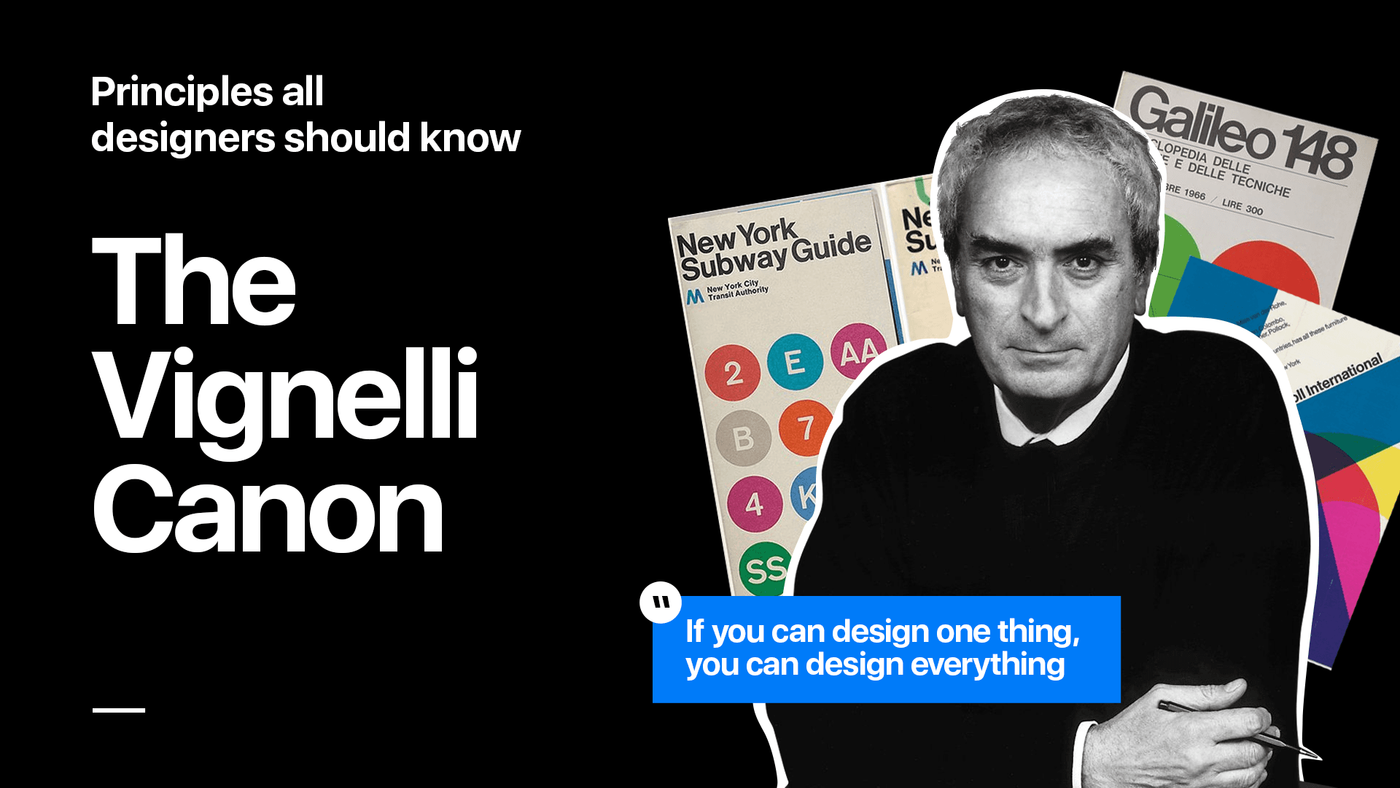 Principles all designers should know: The Vignelli Canon

Principles all designers should know: The Vignelli Canon

Massimo Vignelli gave the world an undeniable legacy, designing the New-York City subway map, American Airlines logo, National Parks and many other. He was the one, who brought it's fame to Helvetica Typeface, created many educational books you definitely should check for, loads of product designs and many more things that we can use and see every day.

His motto was “If you can design one thing, you can design everything”. The main idea of all his works stands for simplicity and geometric shapes; shows a timeless, rational, and visually forceful design that will work forever. When was asked, what project did he like the most, Vignelli said “Every project, from the one I did on the very first day to the last one that I made yesterday”. He also believed, that you'll need just 3 colors to create a masterpiece - black, white and red.

Listening to a late genius of the modern design world, you can learn that 12 aspects of design are extremely important, if you want to create a good one yourself. These are Semantic, Syntactic, Pragmatics, Discipline, Appropriateness, Ambiguity, knowing how to Design in one, Visual Power, Intellectual Elegance, Timelessness, Responsibility and Equity. Let's have a look at the most important ones:

Semantic stands for the meaning of your future design; start from researching the history of your subject. Masimo Vignelli himself could start from looking for more information about the company, product, destination or final user of it. The designer advises listening to your intuition and diagnostic ability, try to bring your vision out in the most natural way. This is how semantic can help you relate the message of your design from sender to receiver, so it can make sense to both.

The Syntactic part here stands for the proper construction of elements in your design. The structure, the grid, typefaces, illustrations or headlines - all these should create a holistic picture. It includes everything - how typefaces work with each other, how pictures relate to the grid and everything else. The designer advises to orient on the grids, as they will help to create a right syntactic picture in your design.

As you see, any work, made by Massimo Vignelli stands for all his principles. Let's have a look at the poster, he created for Knoll International is not an exclusion. It can symbolize Semantics same as Syntactics: the very identity of the brand is shown by overlapping colors over each other (Knoll as an interior and paint brand). The Knoll is also known for it textile and furniture (and colors here symbolize different interiors and the range of choice). By this, he's showing perfect representation of all these principles, including Pragmatics.

Pramatics symbolizes the harmony of Syntactic and Semantic parts. Where the first two meet each other - pragmatic part is thriving. Everything in your concept should be clear and mean the exact thing you want to show by using it. To make your design work, make sure you translate your intention (formulated by Semantic and Syntactic) correctly. Confused and complicated design will reveal confused and complicated mind. Everything is done right if your design stands out of trends and reaches timeless recognition, elegance. When we say about the harmony of the principles, we mean Vignelli's complicated design systems, including Skyline Magazine, American Airlines design and National Parks maps:

The new digital edition of Helvetica, called Neue Haas Grotesk. [Note: It was the original name of Helvetica, when it was first introduced by the Haas Type Foundry in Switzerland in 1957.] It is perfect and with many weights: thin, light, regular, medium, bold, extrabold, etc. He also used such fonts as Times Roman (1931), Garamond (1532), Bodoni (1788) and Century Expanded (1900).

Massimo Vignelli is one of the most important figures in the history of design, and graphic design in particular. His approach works for millions and millions of people every day, his projects and referring to them can be found anywhere in the world. The principles he formulated are going to be actual for the whole design history and so on - this is why he can be called one of the most outstanding figures to model after.

Check our fonts guide to know which one is yours.