Blog
Design
The ultimate guide to filmmaking: How to film like a pro 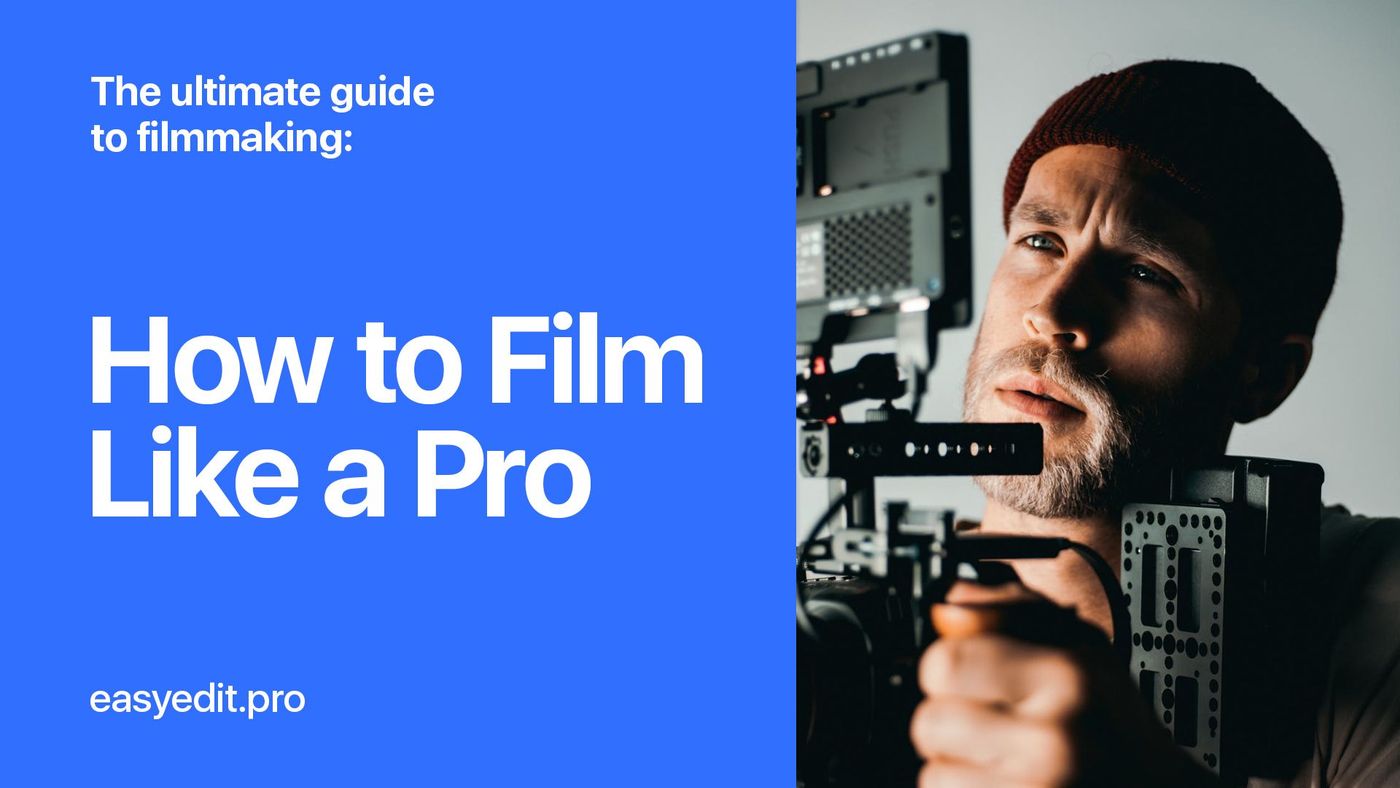 Whether it comes to recording Youtube video, short clip or film, you may follow the same principles. In our previous article we described how to create engaging content for Youtube, pick topics for your audience, edit your videos, create perfect thumbnails and choose the most suitable equipment, now let's learn how to film like a pro!

In the world of cinematic perfection, it's asked to cut your scenes smoothly and seemlesly. It's both creative and technical, which requires some rule-following process. The answer is always simple - show it from the point people precieve the world, or the way you do it yourself.

Every video creator has a precise and detailed script so plan every detail from the beginning - don't go without a storyboard and plot. You'll need it to outline all points you want to cover, understand how much time the video will take and what do you need for recording it.

If you will structure the video in advance, it would be easier for your audience to follow along. Finally, your scenes should be matched in act(or acts), that's why each sequence should be related to one another and balanced.

A-roll/B-roll or what to film

Before you start, you should know that you will film two types of footage - main and additional.

A-roll is the footage with main storyline, B-rollis the additional/complimentary storyline. They are both important - B-roll stands for the details and the depth of your footage; if not for the B-roll, your footage will be left with no visual variety, making your sequence boring.

The function of B-roll :

Set the tone of the main scene by giving complimentary or totally different impression of the A-roll footage (showing how everyone see the main character in the B-roll, while he/she's telling the story from his/her point of view in the A-roll);Clarify and explain where or how the scene is happening;Move between the scenes/the sequences/the acts.

There should be enough scenes to cover it. You got to make sure you've picked the best shots from what you made. The best thing is to make more from the beginning, this will open for you a better choice of footage.

Composition or how to film

Composition refers to the way elements of a scene are arranged in a camera frame. You can film different types of footages, starting with drone filming and ending with interviews, but you'll need to keep on correct composition. We've prepared some technical rules you can follow to film amazing footage.

The Rule Of Thirds

The rule of thirds is one of the most common camera framing techniques used in film and photography. It's about compositional placing a character to show their relation to other elements in the scene. Divide the frame visually into thirds horizontally and vertically, so the image is divided equal parts and becomes easy to visually consume.

Leading lines are diagonal and curvy lines in the frame that lead the viewers' eyes in a particular direction. These lines can be created by things like roads, buildings, signs, arrows or light in the background. It helps the picture to look more complete and cinematic. Also, such compositional lines help viewers to scan the picture and easily understand the visual part of your footage.

The main rule of filming the footage - it should be made under the most natural camera position for human eye, if the shot is horizontal it should be on the level of human eye. It's 180 degrees on imaginary axis, a horisontal line between the camera and subjects, which keeps the space orderly and allows the shot to be clean and understandable.

When you switching the camera view, you should make your shots separated by at least 30 degrees - otherwise your sequence will look like a jump cut(see below). If you will choose shots with angle less than 30 degrees between them, they will look like unprofessionally done match cuts.

The object you're filming should take a main part in the frame. The most common solution is to place the point of interest in the middle of the frame, or on the corner. Several objects shouldn't move at the same time - focal points are the key of viewer's attention and should be always kept. It works the same in animated films, you can check how the main principles applied there.

Transitions or where to cut

Cuts are logical transitions between your footage made to keep it dynamic and rich. Editors use cuts in both video and audio footage to deliver particular idea of the scene, show it from different angles. So, where to cut?

Firstly, let's go through main types of video cut. Don't think that only directors and cinematographers know about them - you'll find most of these cuts in most watched Youtube videos.

Cuts suit perfectly in transitioning from one location to another, sigue between two people in conversation, connecting related quotes or in other cases. They can be used as an alternative to more traditional transitions like dissolves, fades, and other.

The simplest for beginners is to cut in motion, so cuts won't be noticeble. Still, make sure these points of cut are some natural transitions - people entering or leaving, doing some clear and understandable actions. Avoid cutting in zoom or mid-span (in the middle of a shot), it feels unnatural.

you want to demonstrate some actions, related to the previous shot (like emotions, which are shown in “reaction shots”). Camera switching should be motivated - you may want to show person closer to translate their emotions or reaction, or more far to show their movements or particular details about their appearence.

When you cut or merge scenes, make sure they follow the particular way of action. For example, if person leaves on the right frame of the screen, on the next shot he\she should appear from the left one - otherwise it will look like subject is moving backwards. The whole sequence - is the illusion of continuous motion.

For an action, one of the most working and commonly used is a five-shot sequence, showing how someone completes an action. Place 5 shots into this one - if that's someone is playing a piano, you can begin with close-up shot of subject's hands, followed by his or her face. Continue by medium shot of him/her, and afteк with over-the-shoulder shot. For the fifth one you can choose the most relevant angle for your story.

Match cuts are the interesting way to unite two different pieces of footage that are matching together. Is basically the same action, shown from different angles. The hard parts are filming the scenes in identical to each other way and merging without the errors. For the storyline, cut on similar elements, related to each other - it helps to prolong the same line on your sequence.

Highly popular among vloggers and youtubers, jump cut is a dynamic cut, when continuous sequential shot of a subject is broken into two parts, with a middle piece of footage being removed. Jump cuts are considered a violation of Classical Hollywood Cinema editing, but can give a feeling of time that've passed, forward leap in a story or rebellious style to your video.

Cut out the rest

You should learn to cut out the parts that don't work for the video - shot brings no important information, the plot will be progressing in the next shot or you just don't feel like this footage belongs here.

The second moment is the way you use your sound. We advise you to use split edit film techniques, J cuts or L cuts.

Because of this technique, your audio from a following scene overlaps the picture from a preceding scene, creating lively flow and sound transition between the scenes. It's also called an audio lead or audio advance.

An L cut is a variant in which the audio from preceding scene overlaps the picture from the following scene, so that the audio cuts after the picture, and continues playing over the beginning of the next scene.

Cuts like these are usually done for transitions or to link scenes when someone is speaking off-screen.Such techniques are used by professional editors and you can use them too!

P. S. As we said in our previous article about creating an engaging Youtube video, you should have a decent mike and produce a high-quality audio. None of techniques will sound good when the audio quality is poor.

You should keep your video clips organized to quickly find the pieces you need and not waste your time on chaos. Create folders and subfolders, name them, structure your content and you'll find it easier to work with.

You should have separate folders with A-roll and B-roll (main and additional footage), sounds, intros, outros, thumbnails and other folders you would need depending on your project.

When you know the basics of film editing, it's much more easier to be creative. Once you've learned how it's done, you won't make the “newbie mistakes” and will film your sequences from the right angle, cut them smoothly and make them look complete with the right choice of shots. Welcome to the world of filming!